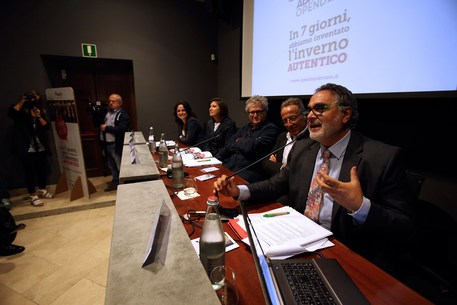 Hear the trumpeting of love 140 deer in Piane di Pezza, the natural scenery of the Regional Park Sirente-Velino. It's 'the essence of authenticity that Abruzzo will promote to become a tourist destination of national and international scope.

It’is also the ambitious challenge launched by the Region that, this morning, in Rome, in the splendid setting of the Casa del Cinema, presented to the press "Abruzzo Open Day Winter - It will not be the usual winter", the first act of a larger project tourism promotion which will start on 26 October and that, for seven days, until November 2, provides a rich and varied program of events be consulted on www.opendayabruzzo.it site.

A Eight days in which it will be possible to stay in Abruzzo in a very low cost a free night every two day stay and two free days every six) while for children from 0 to 12 years, the stay will be entirely free. "The demand for tourism is changing, - began the vice president of the Regional Council d'Abruzzo, Giovanni Lolli - Today the tourist is no longer content to spend a period of relaxation but it is a discerning traveler who wishes to live a complete experience territory he chooses for his vacation. In essence, the tourist wants to see how you eat, what are the main cultural activities, want to know the landscape, the history of the territory that hosts it. In a word, wants to carry around a sense of identity and Abruzzo is able to offer all this and much more - Lolli - considering also states that holds the "monopoly" of the high mountains in south-central and our mountain is able to move. Just as we are monopolists of 'coupled sea-mounts which allows rare case in Italy and in Europe, skiing and go to sunbathe on the beach in the same day. a region that can boast - he added - to be considered one of the cheaper places tampered with by man.

An effective tourism product not only builds the region but the real stars are the operators of the industry- continued - and in this context, thanks to the regional law on PMC And DMC, has created an effective network that is proving a real trump card. As well as the? Idea of the network made it possible to create the first mountain tourist district in the park Gran Sasso-Monti della Laga which now also host the territories affected by the earthquake of Accumoli, Amatrice and Arquata del Tronto. "Lolli, in this regard, stressed that "the Apennines made the history of Italy and we Abruzzo, together with brothers from other regions will never abandon our territories but we must live them safely and we are working to achieve this goal." TOURISM: 200 EVENTS 8 DAYS WITH OPEN DAY ABRUZZO WINTER the director of the Department of Tourism, Culture and Landscape, Giancarlo Zappacosta, in presenting the project, said that "the Abruzzi, for the first time, becoming the showcase of their excellences and is played most of his credibility in order to avoid being defined yet "is not destination".